This Week In Real Estate

The recovery in the housing market will continue to strengthen this year and next year, according to a group of bank economists.

They are forecasting that new home sales will be up 25% this year compared to 2012 and home prices will rise 5% to 6% in 2013 and 2014 based on the Federal Housing Finance Agency house price index.

The consensus forecast of the American Bankers Association economic advisory committee sees 15% growth in residential construction this year and in 2014.

“This strong growth demonstrates that the housing market has finally caught up with the broader economic recovery,” said Scott Anderson, chief economist at the Bank of the West.

However, the mortgage market is still dependent on the Federal Reserve purchasing MBS and keeping interest rates relatively low. “A premature exit from accommodative policy by the Federal Reserve could hurt the housing recovery and the broader economy,” Anderson warned.  This is the biggest issue related to rates and the over all economic recovery, because the market is being supported by artificial stimuli, (IE: Quantitative Easing).  Once the market has to stand on it’s own two feet, will it stall or continue to grow.  In my opinion, since this is not front page news anymore, it should not effect consumer confidence, which is the primary driver.  If QE is eased gradually, we should see sustained growth.  This would in effect be the same as the fed gradually letting their foot off the gas.  If the QE stimuli stays in place we run the risk of the economy becoming over heated and going off the cliff like we saw in 2007.  We don’t need that again!

The consensus forecast calls for continued slow economic growth through the third quarter of this year due to budget cuts and fiscal drag combined with slow global growth.

But the bank economists expect economic growth will accelerate later this year to 2.8% in first half of 2014 due to the recovering housing market, resilient consumer spending as well as less fiscal drag and a pickup in the global economy.

Meanwhile, new hiring will accelerate later this year and jobs growth will hit the 200,000 per month in 2014. 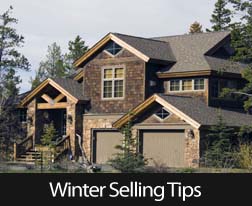 Any real estate agent will tell you that it’s harder to sell your home in the winter. The days are colder and shorter, leaving less time to show your home to potential buyers.

The good news is that most of the buyers who are looking at houses in the winter aren’t just killing time. They’re serious enough about finding their new home to go house hunting at a time that most people would rather stay inside.

There Are A Few Things You Can Do To Make A Good Impression On Home Buyers This Winter:

You can make your home seem more inviting this winter by using these proven techniques.

Are you ready to sell your home? Call your trusted real estate professional today.